Ever since we are kids we are brought up by our parents telling us that there is someone above all of us who is watching and noting each and every deed of ours. We were taught that the sinners are punished in hell and good ones are sent to heaven. We were taught that god will always punish us if commit sins and reward us if we did good deeds. What ever religion we may belong to or whatever faith we may have but this is the common essence of all the religions. These all are taught to us when we are kids because what we believe when we are kids affects our thought process for the rest of our lives. It sub consciously drives us ahead. When I was kid I was taught these stories almost everyday of my summer holidays by my Great grand mother….My brother and I used to listen to these stories with great enthusiasm. I remember those days when these stories would start once my Mom left to work in the morning and continue till evening when she returned…..Such were the narrative skills my Great Grand Mother had.

One day I came to know about Christianity and about Jesus Christ who was born to Virgin Mary Miraculously. I was shocked to know that in this it was the Good people who were punished and crucified in the end. Though in Ramayana and Mahabharata Good people did face some troubles but in the end they were the ones who were winning the battles. I got a bit confused when I first came to know about Jesus Christ. I thought how could God let a good man undergo such a suffering. Then I came to know that Jesus Christ himself was the GOD and he bore the suffering because he was redeeming ours sins. My imagination of God has completely changed that day. Till then GOD for me was some one who can do anything to save good people and here I came know about a Man (claiming to be GOD) who was crucified and he underwent the suffering to redeem our sins. I started doubting the Godliness of Jesus Christ and existence of God. I used to think if GOD really did exist or he himself was the god then how come he can allow himself to undergo such a suffering. But I got convinced that he underwent all that suffering to redeem our sins and believed Jesus Christ indeed was also GOD

One day I came to know about the Reproductive system which is a process for multiplying the human race. It was taught to me by my teacher that a woman cannot give birth to child on her own and that she needs a man to bear a child. I was taught in detail regarding the process of reproduction. Then I got completely confused because I was earlier taught that Kunti gave birth to Karna  by uttering a Mantra and Virgin Mary gave birth to Jesus Christ with out a man. I started doubting my Biology teacher seriously. I did not know who was lying my biology text book or our holy scriptures. I could not question my Biology Teacher as she could punish me and I could not ask my Great Grand Mother as she was no more. I was left confused.

One day I came to know that my father was going to a place in Kerala called Sabarimala to have a darshan of “Makarajyothi”, which is believed to be the appearance of Swami Ayyappa himself. Till then I had only heard other people say about all those miracles performed by god, but that day I came to know that GOD was performing Miracles even in these times. That day my belief in GOD had strengthened to a great extent. If Swami Ayyappa can give Darshan as Makarajyothi in these days then I believed that all those miracles which were done by our GOD’s in our scriptures really could have happened. When I myself saw the Makarajyothi for the first time on TV my belief strengthened further. I did believe that Lord Krishna lifted a mountain on a single finger, I did believe that Lord Rama Changed a stone in to a woman by a mere touch, I did believe that Kunti gave birth to Karna by uttering a Mantra and I did believe that Virgin Mary did give birth to Jesus Christ Miraculously.

As I grew older and wiser, I began to think in a rational and unbiased way. I began to wonder If god can make Kunti have a baby by the utterance of mantra or Virgin Mary to give birth to Jesus Christ without losing her virginity then why would he create the human species with two genders and have a process called reproduction for the multiplication of human race. Why would he deviate the very natural laws on which he has created this universe. The answer was right in front of me(He Would not) but I refused to see it. I refused to believe that GOD cannot the break the laws he has made to run the universe. I started to convince myself by thinking that there were some exceptions like Kunti and Virgin Mary. I started to believe that such exceptions were granted to people who believe in GOD. 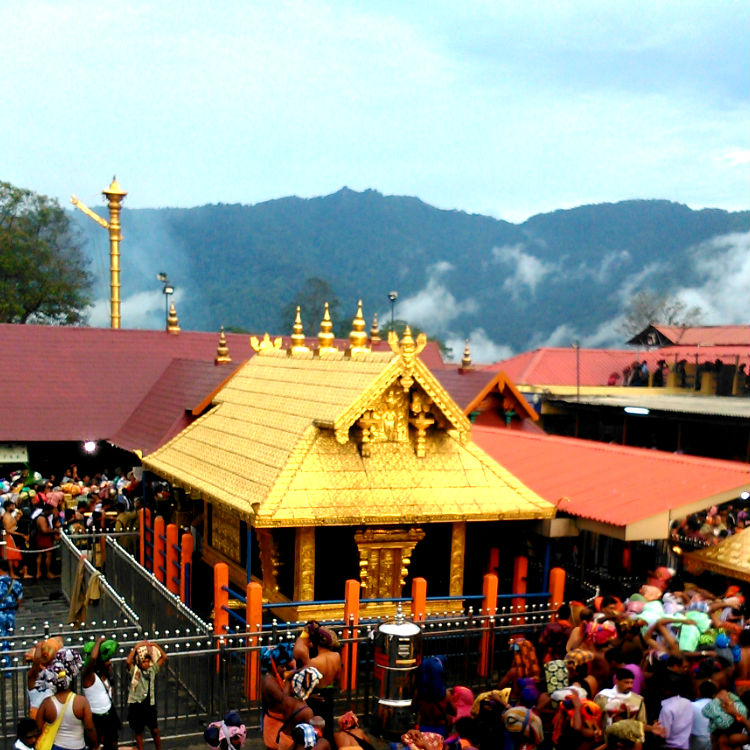 My driving force for believing in all those exceptions was the appearance of “Makarajyothi” every year in Sabarimala. My father is a big devotee of Swami Ayyappa and has been going to Sabarimala for Makarajyothi darshan continuously for more than 15yrs. I myself have been to Sabarimala in my BTECH final year. For me the appearance of holy Makarajyothi was a proof for existence of God. Sometimes the wiser man in me would question how it could scientifically be possible to happen. He would say that there will be some explanation for it, but the believer in me used to rule out all these questions saying that it was the GOD’s miracle and that questioning the appearance of Makarajyothi is equivalent to questioning the existence of GOD which is a sin.  He would further say that if there was indeed an explanation to what was happening then how come it never came out?? I always wanted to believe in GOD whether he existed or not, so I began giving a deaf ear to the questions raised by the wiser man in me. My faith overtook my rationale.

One day on the Makarjyothi Darshan in Sabarimala hundreds of people lost their lives in an accident which was followed by stampede. After the incident many allegations where made against the temple authorities asking them to give an explanation to what was happening in Sabarimala on the Makarjyothi day. They were asked whether they were the people who were behind the appearance of Makarajyothi or it was Swami Ayyappa himself. I was shocked to hear that they said that it was an internal matter of the temple authorities and further that they never said that it was god’s miracle. It was a big blow for my faith because appearance of Makarajyothi for me was not only a Miracle but an answer to numerous questions.

I felt cheated and stupid. All these days deep down inside probably I knew that it IS man-made, but as I have already said I believed only what I wanted to. As most of us, I wanted a miracle like that to believe in god. As most of us, I wanted GOD to do something supernatural or extraordinary things and prove his existence. What I failed to realize is that we are too SMALLER people to ask  GOD to prove his existence.

If we think deeper into what could have been the motive behind creating such Miracles…..we may find something close to an answer. Imagine how would a man behave if he thinks that there are no consequences to what he does… Imagine what a man could do what if he was told that there is no one watching him and there is nothing like hell and heaven. He could do anything without ever feeling sorry for what he did. He would not be bound by any morals or ethics…he would become an animal. I don’t need miracles to believe in GOD now because now I am a bit older and  wiser…but when I was a kid and ignorant of the his ways I did want miracles to happen to prove his existence. I am bound by some morals and ethics today because I was told as a kid that someone above us was watching me and he would punish me if I did something wrong. An ignorant man always wants miracles to believe in god and in the good old days ignorance  awes what most of the people had. To bring order in the world in those times such miracles are created by man to keep the morale in check and instill a fear in the mind of man to do wrong deeds. Inspite of all these miracles bad things did happen in this world but atleast creating miracles kept them in check.  I am not justifying what happened but rather trying to interpret what happened.

Now I see things with a bit more clarity… God is not someone above the Nature, but he Is the nature. Now I don’t require supernatural things to happen to believe in GOD. Now I believe that the very existence of this universe is the proof for existence of god. My existence is a proof for existence of god. We want god to be complicated and supernatural but I think he quite Simple. Miracles do happen in this world every day which prove his existence but we just don’t see them as His miracles. As it is said in the movie Bruce Almighty Miracle is not necessarily supernatural. A little boy from Rameshwaram in Tamilnadu becoming the President of our country is a Miracle. A little boy from Porbandar become The Father Of The Nation is a Miracle… Man who once believed that earth is flat now studying about the Minerals on Mars is a Miracle.

Gone are the days when man was ignorant enough to believe in such Miracles. Science has advanced to such an extent that scientists like Stephen Hawking are questioning the existence of GOD. Some people say that God is the Science which we don’t know yet. I would rather say that even the science which we know Is GOD.   With all due respect to Mr. Stephen Hawking(I know I am nothing before him) I would like to say that understanding the ways of GOD does not eliminate GOD. Science is a way of understanding GOD.As Dan Brown in the book Angels and Demons says “There is difference between GOD and Man’s understanding of GOD“. All these religions and the rituals like the apperance of Makarajyothi are nothing but Man’s interpretation of GOD and his desperate attempts to prove his interpretation to be correct ……but not GOD’s attempts to prove his existence.

Praveen is from Guntur district of Andhra Pradesh born in a family of bank employees. He is Engineer in BHEL staying in Bangalore with his family. With support of his mother, he developed interest in music and is currently learning classical music from Mr. Chinmaya.M.Rao. He occasionally writes on current issues and topics of his interest.
Tags
Belief God Miracles PRAVEEN KARLAPALEM

Never Start A Good Work Without Visiting This Place

Soundarya Lahari All Shlokas Meaning & The Result of Chanting, Worshiping

Lord Dattatreya Instructed Several Devotees That He Was Dwelling In The Form Of P.P.VASUDEVANAND SARASWATI (Tembe) Swami Maharaj

Never Start A Good Work Without Visiting This Place

Soundarya Lahari All Shlokas Meaning & The Result of Chanting, Worshiping

Lord Dattatreya Instructed Several Devotees That He Was Dwelling In The Form Of P.P.VASUDEVANAND SARASWATI (Tembe) Swami Maharaj